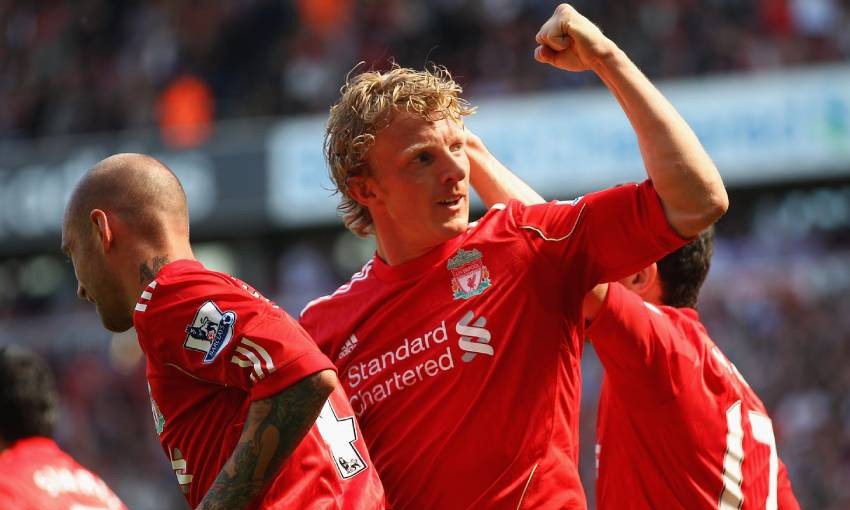 Joel Matip: I'm never satisfied - you have to prove it again

In the first of a regular column on Liverpoolfc.com, Dirk Kuyt analyses the Reds' right-sided threat with Mohamed Salah and Trent Alexander-Arnold, Steven Gerrard the manager and answers your questions.

What a sight it is to watch this Liverpool team at their very best, with one of the best players in the world in Mohamed Salah at the peak of his powers. It was all evident in Saturday’s big win over Arsenal.

Me and Mo Salah have played on the right wing for Liverpool. But that’s where the similarities end.

Back in the day, I scored some important goals and maybe I went past one defender. But to go past two, three defenders so easily – which Mo does so often – was more tough for me. It’s amazing to see.

His stats this season (16 goals in as many appearances) are unbelievable – and they were already very, very high in the last few seasons. He's still progressing and that's a big credit to Mo, the manager and his staff and the players. This team has been together for a long, long time but they're still finding the possibility to get better every day.

Salah fits in so well to the way Liverpool presses, with the wingers pressing on the opposition’s central defenders most of the time. When Liverpool have the ball, he's a little bit tight in his position and that makes him so unpredictable.

Behind him on that right-hand side is Trent Alexander-Arnold, who’s also playing at an unbelievably high level. With Salah playing a little bit inside, it gives Trent the opportunity to play higher up the pitch. He was very important again against Arsenal, not just with his two assists.

He's a defender playing like an attacker. But also defensively when Liverpool lose the ball, his role in the team is very important because he’s able to press so high. Defenders love defending like that. It's not easy to defend like Liverpool, defending very high up the pitch, but when you press well, it's easy – and especially with players like Trent.

His delivery is a forward player’s dream, too. It’s Gerrard-esque. When Gerrard passed you the ball, it didn't matter what distance, he played the ball wherever he wanted – and the same with Trent.

It's great to have a player like him in your team. If you're a striker, you know you only have to put your head against the ball and it's a goal – that's what you want.

Hopefully he has time to play a game for Liverpool Legends, so he can give me a few of those crosses.

Klopp's pressing style and Anfield are a match made in heaven

One of the biggest qualities of this Liverpool team at the moment is the way the team does the high press. The intensity of it, how they recover the ball and create chances from it is just so impressive.

I thought Diogo Jota's press moment for the second goal against Arsenal was amazing. But then you recover the ball and need to slow down. When you press, you need to do it at 110 per cent but when you have the ball and need to beat a defender and then the 'keeper, you have to be a little bit more calm and slow down a bit. It's such a tough skill but amazing to see, not only from Jota but Salah and Mane as well.

Seeing how the fans react to the way the team presses the opponent is so important, too. It's like having an extra man on the pitch. Knowing from experience, it really helps to have the crowd behind you when you're giving absolutely everything you’ve got to press high.

It was also nice to see Tyler Morton get his Premier League debut and Jürgen Klopp continuing to give good players from the Academy a chance in the first team. It shows there's still room and space for young players.

Congratulations to Stevie, who began his reign at Aston Villa with an important win at home to Brighton & Hove Albion.

I followed him at Rangers and I followed him a little bit when he was a youth trainer at Liverpool. He has everything in his guts to be a top, top manager.

Stevie was not a guy who talked a lot as captain in the dressing room. But when he did talk, everybody was listening to him. It meant he made sense when he was talking.

His managerial career is building up very impressively. It wasn't easy to win the league in Scotland, especially with everything that happened with the club.

Now he's ready to make the next step and it's also a brave move because the expectations at an historic club like Aston Villa are very high. It's not easy but that's what he wants. He wants to show people that he can make a difference in football.

@Zubinofficial: Which was your favourite goal that you scored at Anfield and what made it so special?

I scored many special goals but my highlight was scoring the winning penalty against Chelsea in the Champions League semi-final in 2007. Earlier on in the game I scored an offside goal, which wasn't actually offside. It probably wasn't my best goal but it was a very important one. I'll take that memory with me for the rest of my life.

@AdamHall96: Did you ever get frustrated with playing out on the right wing?

I grew up as a striker. When I started my career at Utrecht, the manager put me on the right side as well. Then I came back as a striker again and always believed that it was the position I wanted to play. In my second season at Liverpool, Fernando came and Stevie played as No.10 and Rafa started to put me on the right wing. The most important thing in my career was to win as many trophies as possible. Scoring was important for me but to make a team shape, to make a team work – that's the best feeling you can get from football. It was a change for me but it was never frustrating. In the time with Fernando, Stevie and when I was playing on the right, we were unbelievable and so close to winning the league.

@DanBlake86: How do you keep your locks so golden and beautiful?

Carra knows that back in the day I was always using this hard, yellow gel that makes the hair very hard. The lads were always taking the mick out of me for it and also said I'd go bald in a few years because it couldn't have been good for your hair. But now I’ve changed my hair a little bit. It's still shiny, blonde and I've still got a lot of it, so I'm very happy with it.

I hope you enjoyed reading my first attempt at this column.

I loved my time at LFC so much and I'm absolutely a fan, watching every game. But I also want to be a coach and a manager, and it's very interesting to watch this Liverpool side tactically and I learn a lot from it.

I’m looking forward to sharing my thoughts over the course of what’s hopefully a hugely successful season for the Reds.

Dirk Kuyt: This Liverpool side is better than our 2008-09 team