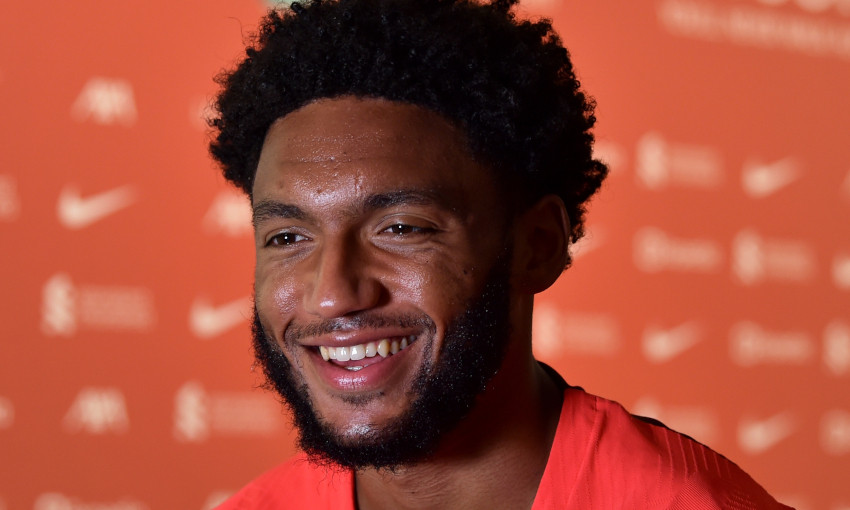 Joe Gomez is aiming to make more precious memories as a Liverpool player after signing a new long-term contract with the club on Thursday.

The defender has committed his future to the Reds with fresh terms, inked at the AXA Training Centre earlier today, meaning his seven years with the club will be prolonged into the coming seasons.

Gomez has endured ups and downs during his time at Anfield to date. Serious injuries have prevented him from adding to his tally of 142 appearances so far, but the 25-year-old has claimed winners’ medals in the Premier League, Champions League, FIFA Club World Cup, UEFA Super Cup, FA Cup and Carabao Cup.

Now, having dedicated his future to Liverpool, the No.12 is targeting adding more positive stories to his journey in the coming years.

Watch our exclusive interview with Gomez below, or scroll down for a full transcript.

Joe, first of all, congratulations. A new deal at Liverpool, a long-term one, how does it feel to get it done?

It's obviously a special moment for me and my family. Another one that you dream of as a kid and one I don't take for granted. It is an unbelievable place to be; in my eyes, probably one of the best - if not the best - clubs in the world at the minute. The opportunity to extend my stay here was an easy decision to make, really.

At the age of 25, you could argue the best years are still in front of you as well. Does that play a big part in signing a deal like this?

Yeah, for sure. Obviously I have been here quite a while now, but in the grand scheme of things I still feel young and, like you say, the best years are ahead of me. I have got more to learn and the time to do that. I think I have the platform here to do it with the manager and the coaching staff around me and my teammates, to make sure the best years are ahead.

You were a teenager when you first signed here. If all goes according to plan, we could even be talking about testimonials. Is that your hope, that you're at Liverpool for the long term?

For sure. That's an aim of mine and I am grateful to have the opportunity to spend this many years here at a club like this. There have been great memories and challenges too, but that's a big thing for me - the opportunity to stay here and create more history with the lads, and be a big part of it. That's my aim and to hopefully come away with a career I can look at and be proud of as a Liverpool player the whole time.

What has changed from a club perspective since you joined as a young boy?

A lot. I guess the gaffer came in pretty early into my journey here and we've lived through it with the supporters and as a team. Some unbelievable teammates have joined and [we've had] success. The belief within the team and the experience that has come with the finals and the trophies have probably helped evolve the team, the mentality within the team and the belief within the city. That's credit to the management and the gaffer. It's been a joy to have been a part of that journey, but I think the main thing is I am definitely hungry to play a big part in what's to come - and the team are to keep on progressing and not dwell on what's been achieved.

What's changed about you as an individual? We often don't see the struggles, we see the good times and how brilliant it must be playing at the top level, but there've been struggles along the way on your journey...

Definitely. I wouldn't change them, they have been tough, tough times and early on, from the get-go in my first year, I had a big test. I've had some big ones since then, but I wouldn't change. I think those challenges and this club have shaped me into the man I am today. As you say, I came as a teenager and that's something I am thankful for, I have had such a good environment to grow, not just as a footballer but as a man. There are obviously times where I have to look back and take the lessons from and grow from, but there are also great memories. I am really excited about the future and what is to come.

Naturally you will be disappointed you didn't play as much as you would have wanted to last season, so how do you approach that going into a new campaign?

Obviously it was off the back of a year that was tough for me. I came into pre-season in a place where I knew I kind of had to find my feet again and the boys did well. It is not something I am going to ignore and act as if I didn't want to play more, but my hunger is there. I did my best to apply myself throughout the year and the coaches were aware of that. I definitely tried to be the best teammate I could be for the boys in a supportive sense, but also pushing them and trying to compete. I think the big thing this year is to take that challenge on. It's obviously a decision I had to make and the result is that I want to fight for my place and be the best I can be. It is part and parcel of being at a club like this; we've arguably got the best players in the world, so that's going to raise my ceiling but also I have to try and push them and fight for my place. Essentially that is what this year is about for me.

That says a lot about you as a player, an individual and an elite athlete. You accept at a massive club that the competition is going to be intense for every position...

That's all you want. I think that's why players are enticed to come here because you know you are going to be in the best environment against the best players each day. It is going to push you - and it has pushed me over the years, for sure. The boys have helped me learn things I probably wouldn't have elsewhere, along with the gaffer as well. That's definitely my aim, I hope the best years are ahead of me and I am more determined than ever to make sure that's the case. It's a fresh start to try and attack the year.

You've already mentioned the manager a couple of times. He is a massive pull for new signings to come here. Is it the same for the players that are already here, that he has a massive influence on you and the decisions you take?

Massively. The gaffer is, I think, the best in the world for me. He has been a massive part of my life, not just as a manager but as a man. He teaches us all principles outside of football each day in the way he carries himself and the way he is as a person. Having the opportunity to learn from him as a teenager until now has been great and I know there is a lot more I can learn from him, hence why I feel this is the best place for me to be. I am definitely grateful for the lessons he has taught me throughout my time here, whether that be through injury or through times when I've been doing well. He has always got the right balance, the right advice. I think that's why people want to come here and why those that are here - like me - want to stay.

You added two trophies to the cabinet last season and both others went down to very fine margins. How confident are you this story is almost at its start point?

Very. I think we've strengthened this year in the summer. I'm sad to see Sadio go, but we've got a manager that is going to be here for a while now. As I said, [he is] if not the best in the world then I don't see who else is. That gives us a platform to keep going and I think the main thing is the mentality within the team, there is no sign of resting on our laurels or feeling like we've accomplished all there is. I think the lads are hungrier than ever and to be a part of that is massive and I think the platform is there to have another successful season and fight on all fronts. Obviously it was a disappointing end with the Champions League, but I don't think coming away from that there was an ounce of worry that we wouldn't be back there again. That's the goal, obviously.

It was interesting to see the change in the players from when they got on the bus for the parade after the Champions League final to when you got off it again. You could see the appetite in the fans, you could see the size of the club again. What did that do for you as a group of players, seeing the fans in the city during that parade?

I can't speak for the rest of the lads, but for me it definitely caught me by surprise. Again, it is a sign of why we want to be here as a team and why we are so blessed to be a part of this club. I don't think there is another team in the world who could lose the final and come back to that sort of reception and support. I think many of us were quoted as saying it was one of the best days of our lives and we're not going to say that lightly. It was a special moment. Again, times like that are a chance to reflect on what we have here at this club. To do that just spurs us on and it's why we want to play for the city and for the fans to give them more positive times in the same way they gave us that lift after what was a disappointing night.

You could hear the players saying that: where else would you get that kind of welcome from fans?

Arguably nowhere. It is a special city and I think everyone who comes in knows that. Whenever we play at Anfield, we know that. Day in, day out, we all know we are in an incredibly fortunate position to be at a club like this. That was one of those moments that emphasised that.

Let's finish with what next season looks like when you close your eyes and you envisage what could be ahead for you individually and also for this team?

Obviously, individually is to do all I can to help the team. To push myself on all fronts and hit the ground running. To participate more and do all I can to get the best out of myself and my teammates. I think as a group, the sky is the limit. We want to go one, if not two, better than last season and aim for it all. We definitely have the ability to do that and the belief is there, it's just about us taking it one game at a time, like we did last season, and just being true to ourselves, playing the way we play under the gaffer's guidance. Who is to say we can't go on to do more than we did last season?