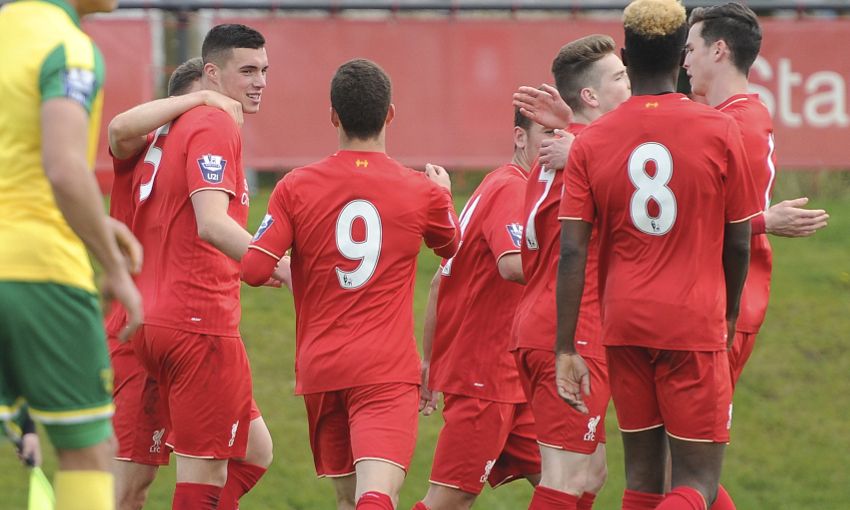 Liverpool U21s' penultimate game of the season ended in success with a 2-1 victory over Norwich City at the Academy on Monday afternoon.

The young Reds responded brilliantly to Glenn Middleton's opener as Ryan Kent quickly made it 1-1 before Lloyd Jones' second-half header secured a deserved three points for Michael Beale's side.

The result relegates the Canaries from Division One in the Barclays U21 Premier League, having needed a win to keep alive their hopes of avoiding the drop.

Beale fielded a strong starting XI for the final home game of the campaign, with Jon Flanagan and Pedro Chirivella featuring for 45 minutes before the duo were replaced at half-time in a planned move.

Meanwhile, Brooks Lennon was drafted in as a late replacement for Jerome Sinclair, who pulled out through injury, and Ovie Ejaria made his first appearance for the U21s side.

In a slow start to the contest, Joe Maguire - starting out at left-back - was on hand to make a wonderful slide tackle inside the penalty area to deny Louis McIntosh from unleashing a shot towards goal.

However, the deadlock was broken in the 18th minute as the Liverpool back four failed to clear their lines this time.

Middleton capitalised and picked up possession just outside the box before the No.11 drilled a low, powerful effort beyond Adam Bogdan.

But the hosts displayed their fighting spirit and drew level five minutes later.

Moments after Chirivella made a goal-saving block, excellent work from Ejaria on the left hand side paved the way for Kent to equalise with a calm left-footed finish.

The two goals sparked life into the affair and both sides could have gone on to establish a lead.

Joao Carlos Teixeira came closest when his effort was well saved by goalkeeper Aston Oxborough and ricocheted onto the crossbar, following a brilliant weaving run from Kent.

And Liverpool came flying out of the blocks after the interval.

Straight from the kick-off, Ejaria whipped in an inviting cross that was pushed out by Oxborough almost into the path of Lennon.

The Canaries were desperate for a win in the hope of staving off relegation, but it was the young Reds who were on top in the second half.

Substitute Cameron Brannagan had a strong penalty shout turned down in the 70th minute when the midfielder was upended by Ebou Adams.

However, the Reds did not have to wait much longer to complete the turnaround.

With 11 minutes of the 90 remaining, the superb Kent relentlessly chased down a lost cause from a Liverpool corner before winning the ball back and providing the assist for Jones.

The centre-half found himself free inside the 18-yard box and then powerfully headed in to secure the win.

The U21s conclude their 2015-16 campaign away to Manchester City, with a date for the fixture yet to be finalised.