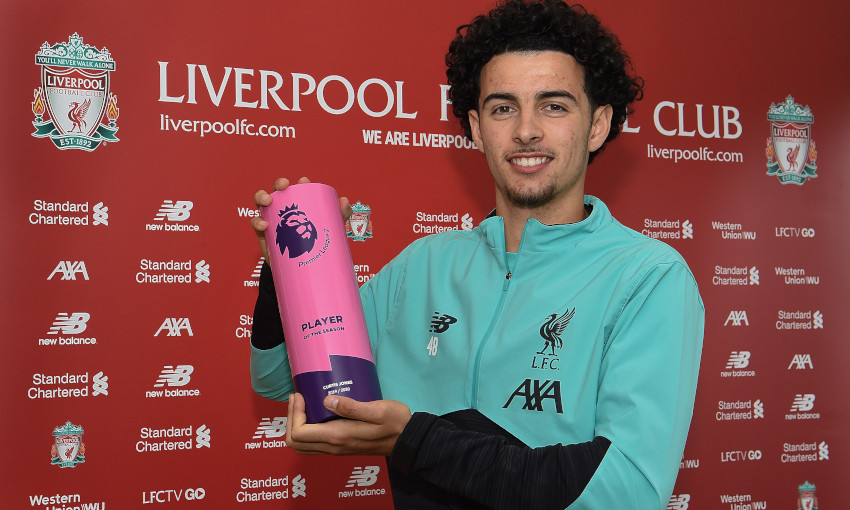 Curtis Jones was 'buzzing' with another milestone in his development as he was presented with the Premier League 2 Player of the Season award for 2019-20.

The Scouser netted nine times in PL2 before the campaign was curtailed due to the COVID-19 pandemic earlier this year.

It’s the latest mark of recognition for the Liverpool Academy graduate, who made 12 appearances for the first team across the season.

Jones scored a memorable Anfield winner against Everton in the FA Cup, having previously converted the decisive penalty past Arsenal in the Carabao Cup.

He notched his first Premier League goal at the beginning of July and received a winner’s medal when Liverpool collected the trophy last week.

Upon being named the PL2 Player of the Season, Jones joined Liverpoolfc.com for an exclusive chat about an unforgettable campaign...

Curtis, congratulations on picking up the Premier League 2 Player of the Season award – what does that mean to you?

For me it’s huge. I’ve enjoyed a great season with the first team so any time I’ve come down to play for the U23s I’ve always tried to give it 100 per cent. I have to give a massive thank you to the staff who were there with the U23s, Critch [Neil Critchley], Jenks [Tim Jenkins] and Barry [Lewtas] with the U19s. I’ve got to thank my teammates and give them credit as well. I’m buzzing. 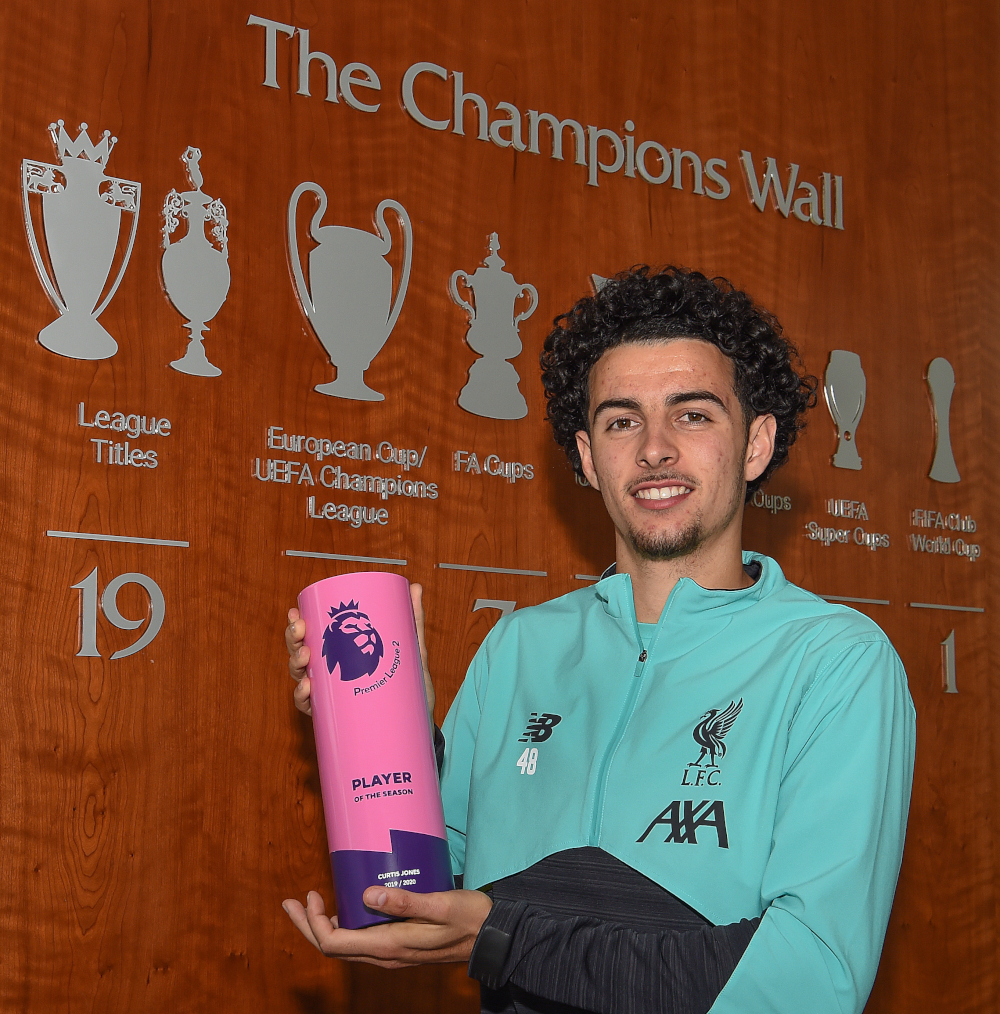 You scored 17 goals for the U23s and the U19s in Europe, it’s a total of 20 goals this season including your three for the first team. You’ve got to be happy with that?

I think for a few years working with Alex [Inglethorpe], Barry and Critch I was always talking about wanting to score more goals and when I was in training I was always working on that. I had that season with Steven Gerrard when I scored a few then, and then I came into the U23s. At first I didn’t play as many games as I would have liked but I’ve got to be respectful to the gaffer and the staff and I’ve got to thank them for keeping me around the team. Last season I got plenty of games and I also felt there was a bigger role on me because there were games when the boys looked at me to see if I could pop up with something, and I think the stats showed I did it when it was needed. So, 17 goals, 20 including the first team and I hope there’s many more to come.

You are a young man yourself, but we saw early on in the U23s team a very young side; Harvey Elliott was just 16, Neco Williams was with you, young lads like Tom Hill, Layton Stewart and James Norris from the U18s. You were captain, so was part of your role to guide those lads and inspire them?

Yes, definitely. I’ve played their role before when I’ve been the young lad and came into the team. There’s a bit of pressure on you from the rest of the other lads because you are there for a reason. The boys know that they are capable of playing well, scoring goals, or lads like Chuck [Norris] making a vital tackle to keep us in the game and stuff, but I think it’s much different playing for the U23s than it is for the U16s or the U18s. It’s a massive step but any of the young boys I’ve played with took the game by the scruff of the neck, you can say, and made a mark, and any time I played with them I really enjoyed it and even though it was a young team it was great.

You touched on it before but how big an influence have Alex Inglethorpe, Critch and Barry Lewtas been on you, because I know you think very highly of them for the guidance and encouragement they have given you so far?

Definitely, I think they were the perfect three I could have had at the Academy in terms of keeping me humble and grounded, telling me when I’m doing well and when I need to have a bit of a boost or a kick up the bum! It’s been perfect for me to have those three around me and to then know when it was right to push me up through the different age groups. It’s been perfect.

Some standout moments from the Premier League 2 season, then… you got a couple of goals in a 2-2 draw at Arsenal, when you had their first-team player Hector Bellerin trying to mark you. That must have been a pleasing afternoon, showing what you can do against an experienced Premier League player?

I love a challenge. Any time when you come up against senior players playing for the U23s who are coming back to fitness, I love that feeling because then it’s the chance to go and show I’m ready to take that next step. Bellerin was obviously in the Arsenal team and I was fortunate to score two goals and I remember I could have got a couple more, so I showed what I’m capable of doing. He’s a great defender who has had a great career but I did what I had to do on the day.

The 5-0 win over Southampton in Kirkby on a monsoon of a night as well, when you had so many efforts at goal and then scored a screamer…

Any time I play I don’t mind if it’s a good pitch or a bad pitch, I love performing still and I would never blame the pitch, but the rain was really bad and we were soaking and we had to change kit at half-time! I’m someone who always wants to score goals. I look at Mo and I look at Sadio and Bobby and see how many times that they shoot for goal in games. That’s what I’ve tried to put into my game but of course you’ve got to try to find the balance and take the right decision to shoot or if you can go and play a pass. In that game I think I got a little bit too greedy and wanted a goal but I was happy to get the goal in the end, the boys were as well, so I’m thankful to them for not getting a bit of earache off them!

How about that quickfire hat-trick against Sunderland in Kirkby in the space of around eight minutes, the last U23s game before lockdown ended the campaign?

There was 10 minutes to go because I remember asking the referee how long was left. He told me 10 and I was telling myself, ‘I’ve had a good game but I need to score at least one.’ I then got my first goal and I don’t know, I just had a feeling to think, ‘Go for another!’ I love it when I can turn the ball onto my right foot and then curl it into the top corner. I knew there wasn’t long left and what happened next I don’t even know what happened. I won the ball out on the left and I broke with Liam Millar. I just sprinted into the box and Joe Hardy was also on a hat-trick too. Me being me, I just wanted to sprint into the box and get their first and thankfully Millar picked me out with a good cross and I scored my hat-trick in eight minutes, so it was a great game for me.

From U23s captain to Premier League title winner. How would you describe the emotions when Jürgen brought you on against Chelsea and you knew the winner’s medal would be yours?

All season we knew we had a massive chance to win the Premier League. I was hoping and praying to get some game time. I think the medal was more in the back of my head at that time and I was thinking more about just playing and getting experience and showing what I’m capable of doing. We then boxed off the league and I think at the time I needed three or four games [to qualify]. I know what the manager and the staff are like, though, and if they can give you game time and give you a medal then they will. I think at the same time I’ve earned an opportunity to go on the pitch and play. It’s OK saying, ‘He’s a kid and he’s got a game left and he’s one game away from a medal’, but no-one actually sees how hard I’ve worked on the training pitch. When I’ve played for the first team I’ve scored and played well and when I’ve played for the U23s my attitude has been good, so I’ve been lucky enough to get the Premier League 2 Player of the Year. It just goes to show that all the hard work, determination and good attitude pays off in the end. I’m just so grateful to the manager and his staff for giving me that opportunity and I look forward to many more.

As a Liverpool fan and a player, how special was it to be on that podium on the Kop when your captain Jordan Henderson got his hands on the Premier League trophy?

We would have loved for the fans to have been there because it’s their support that keeps us going but I think in a difficult time it’s only right that we obey the rules and the fans and ourselves stay as safe as we can, so we did it the right way. But it was just unbelievable! Words just can’t say exactly how I feel.

Your winning penalty against Arsenal at the Kop, the Everton FA Cup winner, captaining the first team in the FA Cup win over Shrewsbury at Anfield – when you sit down and reflect on what has happened, can you quite believe it?

I can but I can’t. I think you all know as a lad how I am and I am humble off the pitch but as soon as it comes to the football I believe I’m capable of doing good things. I always know when I go onto the pitch I will perform, give it everything and always try to give a glimpse of something that will show that I’m ready to take the next step. In terms of how quickly it’s all came around, as it was one thing after another, it caught me a bit by surprise but I’m a confident boy and I’m ready for whatever is next so I was prepared, I was ready and successful in those things.

I remember a year ago talking to you at the Academy and despite a breakthrough season you weren’t overly happy with yourself – you do set yourself high standards, so you’ve got to be proud of last season and it now gives you a big platform to build on for the future…

Yes. To play for Liverpool I think your platform has to be very high anyway, not just your own personal goals. A platform here is different to elsewhere in terms of the team you are trying to break into. Your goals have to be even higher. For a young kid like me, getting the chance in the first team to go and show what I can do, I think it’s upon me to repay them to get my successful bonus in terms of getting the game time, goals, opportunities and the medals. Every time I am called upon I will always be ready.