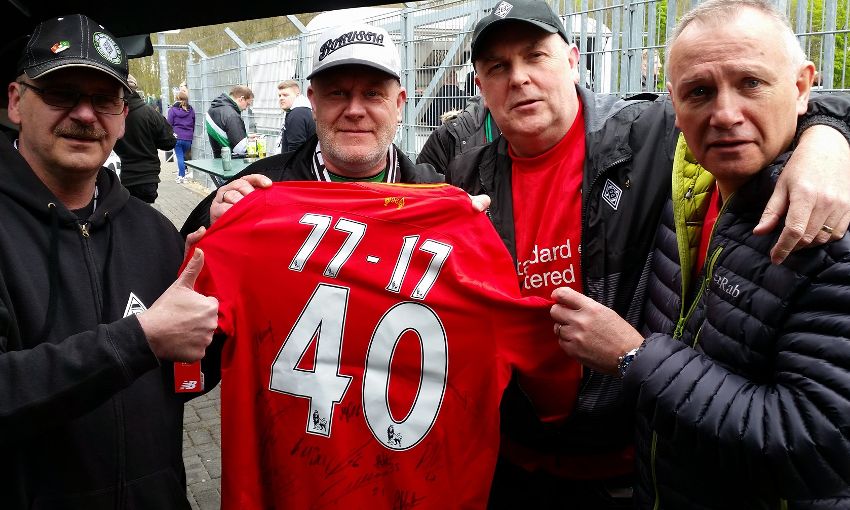 Heading to Anfield on Saturday? Use our handy fan checklist

A party of Liverpool supporters recently returned from their 10th friendship visit to Moenchengladbach, where a special relationship forged over many years was maintained.

Reds fans and their counterparts at Bundesliga club Borussia Moenchengladbach established strong links following their meetings in European competition during the 1970s.

This year's trip also marked a special anniversary as it is 40 years since the two clubs met in Rome for the 1977 European Cup final, when Liverpool triumphed 3-1 to win the trophy for the first time.

Since 1992, a group of Borussia supporters have travelled to Anfield every winter to support Liverpool; while Kopites, led by organiser Graham Agg, have journeyed in the opposite direction annually since 2007.

In 1991, a delegation of Gladbach fans flew to Merseyside to present a cheque for 21,000 Deutsche Marks to the Hillsborough families, a gesture that has never been forgotten.

It is a friendship that has stood the test of time, and is unique in world football.

The annual visit included guaranteed match tickets in the completely sold out Borussia Park to watch Borussia in action against Jürgen Kopp's old club Borussia Dortmund. Although Gladbach suffered a 3-2 home defeat, a great afternoon was had by all.

Approximately 30 minutes before kick-off, the LFC hymn 'You'll Never Walk Alone' was played in Borussia Park in respect to the official 10th annual friendship visit, and organiser Graham Agg joined supporters from both sides on the pitch before kick-off to unveil the specially commissioned 'friendship flag'.

Agg said: "We had 62 LFC supporters made the official visit this year and during the weekend in Gladbach, they were all acting as ambassadors for LFC and the city of Liverpool.

"Yet again I can confirm that their behaviour at all times was absolutely impeccable and everyone of them were a credit to the club and the city of Liverpool, and for that I would like to thank them all and hope to see them all back in Gladbach next year."

The next LFC supporters friendship visit to Moenchengladbach will be in spring 2018 and anyone interested in joining this annual event should contact Graham via his email address: grahamlfc@aol.com.