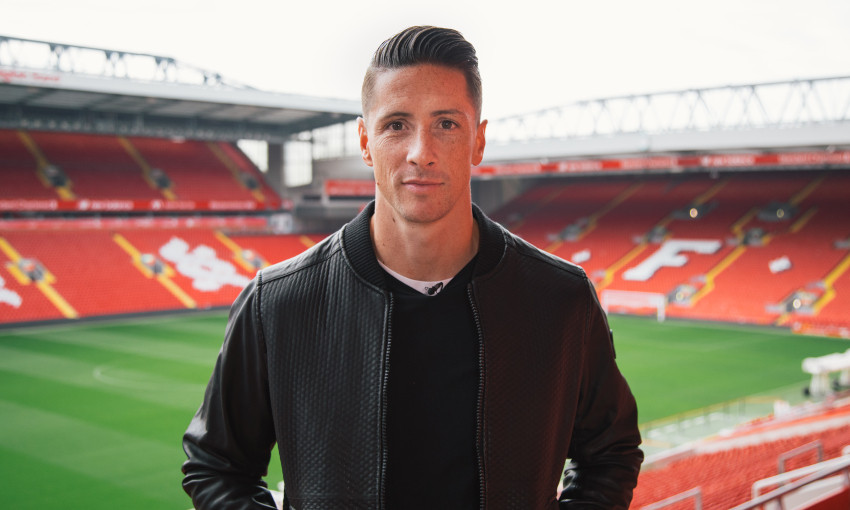 Fernando Torres has explained why his three-and-a-half years with Liverpool represented the peak of his powers on the football pitch - and insisted he will proudly be a Reds fan for the rest of his life.

El Niño was a devastating presence at the tip of Rafael Benitez's attack after joining the club from Atletico Madrid in 2007 and scored 81 goals in 142 appearances.

Blessed with searing pace, precise control and clinical shooting, Torres quickly became a modern-day hero for supporters enchanted by his impact on Merseyside.

His rapport with the fans was instantaneous, the Kop bouncing to his very own Anfield song during a debut season in which he netted 33 times, and beyond.

He would, of course, depart for Chelsea in 2011, but the passing of time – and a return for the all-star charity match four years ago – has helped to rebuild a relationship with Reds.

Now, Torres is set to feature at Anfield in the Liverpool shirt again, as part of the LFC Legends team that will face Barça Legends at the stadium in March 2020.

To mark the announcement of his participation in the LFC Foundation charity game, the Spaniard recently sat down with Liverpoolfc.com for an exclusive interview.

From the seats in the Main Stand at Anfield, Torres opened up on feeling capable of anything while playing for the Reds, his partnership with Steven Gerrard, the Champions League triumph in Madrid, and being a fan for life...

Firstly, welcome back to Anfield. It’s 12 years since you first stepped in here as a Liverpool player – what are your memories and how special does it feel to return?

It’s always really nice to come back to Liverpool. Many memories come to my mind, especially here at Anfield, when I felt so happy. Every time I see Anfield on the television or watching Liverpool games, there are always a lot of memories and feelings coming.

Does it feel different now?

Everything changed so much around the stadium, obviously with the new stand – it’s the first time I’ve seen it and it’s amazing. But you can still feel the same feelings as when I was playing here. It’s a different place. It’s like a piece of magic around the stadium and I’m really happy about the way the club is doing at the moment, I’m supporting Liverpool from everywhere I am. So it’s always special to come back.

You retired a short while ago and it’s a time for reflecting on your career. How do you look back on that spell with Liverpool?

Obviously it was a really nice time for me. No doubt, it was my peak as a player. I did enjoy probably my best years playing football with a Liverpool shirt, especially playing in a side with all my teammates, but especially Steven Gerrard. The memories will last forever. I can remember every goal and every game I played here, and every goal I scored. And the feeling of playing at Anfield in front of the Kop and the Liverpool supporters. Even if it was 12 years ago the last time I played in a Liverpool shirt, I can go back and remember every detail.

Do those memories just drift into your mind sometimes?

Especially in the last few months before my last games as a professional, many places showed the highlights from my career and most of the goals or pictures were with Liverpool. It was a really special time for me – three-and-a-half years where I felt like I could do anything. I reached a missing level, a level I could never expect when I was a kid. So I’m really grateful to Liverpool and hopefully in a few years my kids will realise how important the city is for me. My son was born in Liverpool so my link with the city will forever be very high. It will be really nice to bring him to his city to watch a Liverpool game; I will do it very soon.

Rafa Benitez must have told you so much about Liverpool before you signed for the club. Was it everything you hoped for? Was it even better?

I think it was much better. I was looking for a new experience, a place that I could show myself I could do big things, and I found the perfect place. A place where the people welcomed me like I was one of them. I had many Spanish players at that time in the team that helped me settle in the city and in the club. And afterwards, on the pitch it was really easy. I remember the first game I played here against Chelsea, Pepe Reina came and said, ‘This is what I was talking about when I said you should come to Liverpool and play at Anfield.’ I remember that day I felt like I could score in every single game I played at Anfield; it was not every game, but it was close! I felt so free and I felt like I could do anything that passed through my mind. It was an amazing experience. 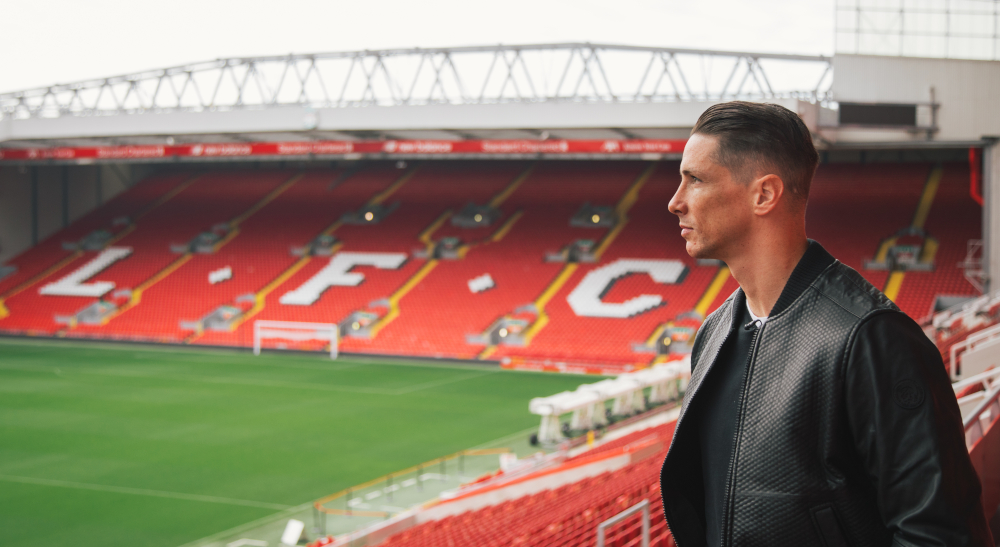 Can you explain why you struck up such a strong relationship with the fans so quickly? They loved you from the start…

The club I came from, Atletico, is very similar in values. At the end, what the fans appreciate the most is the hard work and dedication, and to be professional all the time – when things are good and things are wrong. I think I showed that from the beginning. I just came here to work hard and try to help the team. It’s not only scoring goals and to be in the heart of the people. When the people see a player works hard, they will always support those kinds of players. That’s what I learned when I was a kid and I tried to do from the first day I played football. Here at Liverpool, I saw that people really appreciate the hard work.

You’ve said so often Steven Gerrard was the best player you played with. What was the secret to your partnership on the pitch?

I was a big fan of Gerrard before I joined Liverpool. Everybody in football feels this way about Gerrard. So to have the chance to play with him was a big point for me to come to Liverpool as well. It was the first time I realised I needed something to complete my game – and Gerrard had everything that I needed. It was really easy to play with him. Sometimes you’re watching the game and predicting something that can happen, and you see something your teammates don’t see. But it would happen with him. He saw the same things I saw. So I just needed to run. When I saw the ball was going to finish at his feet, I started the run and I knew he would see the movement I was doing before looking at me. It was so easy. I really enjoyed that time, I miss it a lot. 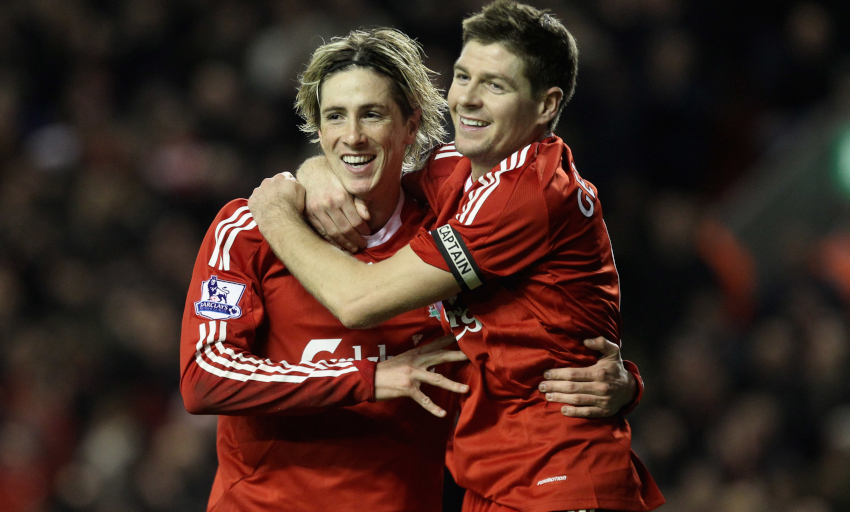 The fans were obviously so disappointed and hurt when you left Liverpool. That relationship seems to have strengthened again over the last few years, with the reception you got when you came back for the charity match in 2015. Was that important to you, something you wanted to fix?

It was a really important day for me. I felt like at the end [of that game] we were in a good way. One of the regrets I have is the way I left the club. With time, I think I could explain the reasons. I’m really happy that every time I go anywhere in the world, I see Liverpool fans and they come to me and thank me for my time here. It should be the opposite way. I always thank them for the way they made me feel when I was here, and even now. I’m really proud to say I will support Liverpool forever, it doesn’t matter what happened. Even when things between us were not at their best, I felt that I needed to support Liverpool. The city, fans and club will always be in my heart because it’s the way I feel and I cannot change that.

You couldn’t make it to Madrid in June but you were supporting Liverpool during the final. Talk us through your emotions of watching the club win the Champions League…

I know how important it is to win trophies for Liverpool. I was really looking forward to the end of the Premier League and it’s unbelievable with 97 points you cannot win the league; I know how important it is to win the Premier League for Liverpool. [I believe] it will happen this year. I was so, so proud and happy for the club and the players and everybody around to win the Champions League for the sixth time. It’s not easy, it’s amazing. And especially because it was in my town, in my stadium. So I was so happy to see Liverpool lifting that trophy in Madrid.

How impressed are you by this current team? You understand the demands and pressure involved with trying to achieve what they want to achieve…

Their progress is amazing. Since Jürgen Klopp came, things have got better and better. Liverpool added some amazing players to the squad, some of them are the best in the world. They are in the right way to become better. It’s difficult to say after getting 97 points and winning the Champions League, but the potential of the team can still be better and that’s huge. Hopefully that happens. It’s not easy in this period of football to make one step forward and compete against all the teams with more resources, but they did. So people must be really proud of the board, the coach and obviously the players. I’m sure they will reach their goals this season. I’ll be supporting, 100 per cent.

You would have scored a few goals in this team…

It’s difficult to improve the team Liverpool have right now. More players will come, the team will be more competitive and the players will be better. But I would have some chances to score in that team!

On this day: Maradona watches Reds secure progress in Europe

'Jürgen has my number!' - LFC quotes of the week