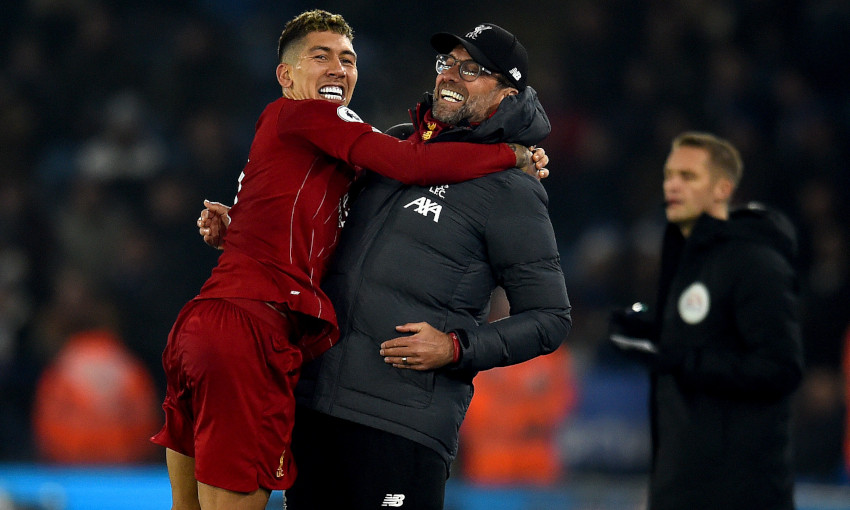 The LFC quiz of the decade

Liverpool extended their lead at the top of the Premier League after a resounding 4-0 win away at second-placed Leicester City on Boxing Day.

The victory saw the Reds stretch their lead at the summit to 13 points.

Liverpool swaggered closer to the milestone of managing a year without defeat in the Premier League, bloodying nearest challengers Leicester City 4-0 on Boxing Day during an education on what it takes to be pacesetters in the division. The scoreline, as impressive as it was, could easily have been more pronounced. There are 13 points between Liverpool, who still have a game in hand, and their vanquished rivals in second and the question now is not who can catch them, but just how do you ground such a resolute machine? That unreal standard, born out of Manchester City’s relentless brilliance in the previous two seasons, has seen the Merseysiders stung by just one defeat in the last 57 top-flight matches – away to Pep Guardiola’s side on January 3. The authority Klopp’s side showed here – away to title rivals after an exacting Club World Cup campaign that required unwelcome long-distance travel and extra time in the final – was astounding.

From the first whistle, Liverpool exerted their vast superiority on proceedings at the King Power, making light of any cross-continent travelling they have recently undertaken. The big question for Liverpool was how the intriguing Club World Cup subplot would affect the players as they notched up their eighth of nine games this month. It was a quizzer that was answered emphatically as they turned in a simply stunning performance to blow away their hosts in some style. Title rivals? Not a chance. Leicester didn't land a glove as the visitors pummeled them for 90 punishing minutes. Given the significance of the match and the draining run that had preceded it, this here must surely go down as one of the best showings of Klopp's reign at Anfield. Liverpool have one more game to negotiate before the New Year and just two points have been dropped so far. It's 52 points from just 18 played. Numbers that are hard to comprehend. It is why they find themselves 13 points clear of the nearest competitor. Alexander-Arnold capped a fine individual performance with a stunning breakaway goal.

If this Boxing Day clash proved anything, it’s that nobody in the Premier League can touch the Reds right now. As for Leicester, they had no answers. Brendan Rodgers’ side have deserved their plaudits this season, but they were given a lesson here. This was men against boys. It’s been some year for Liverpool, 2019, but they might not have delivered a performance as good, as complete as this. Alexander-Arnold’s display was a thing of beauty, and he capped it with his side’s fourth goal 19 minutes from time, as crisp a finish as you will see.

Joyful and, indeed, triumphant. The King Power Stadium was a boisterous place with Liverpool’s world champions in town. New-build stadiums can often be deathly places. Not this one, with its operatic pre-match fanfare, its sense of high-end underdog glamour and with a Leicester team unbeaten at home in the league this season. At which point, enter the red machine and, in particular, another extraordinary, incisive and deeply unusual performance from Alexander-Arnold. Every week the Premier League teamsheets seem to make the same category-mistake with Liverpool’s defence. Liverpool’s No.66 plays (it says here) at right-back. In reality Alexander-Arnold is something else, a 21-year-old footballer whose talent has redefined his role, creating in the process something new and excitingly disruptive. Alexander-Arnold made two goals, scored Liverpool’s last one in a 4-0 win and looked irresistible at times. He is an extraordinary player in so many ways, a full-back who operates at a constant level of creative urgency.

There is something David Beckham-esque about Alexander-Arnold's crossing. It is easy to forget Alexander-Arnold is just 21. The first of his three was exemplary, he was given the ball by Andy Robertson, a left-footed clone, and all he needed was a touch to cushion the ball a look up and then the delivery. Liverpool have now scored 500 goals under Klopp – since his appointment in October 2015. To put it into context, 371 goals were scored under Rafa Benitez, 354 under Gerard Houllier, 437 goals in Kenny Dalglish's first spell. Only the 648 under Bob Paisley and 1,034 under Bill Shankly top Klopp.