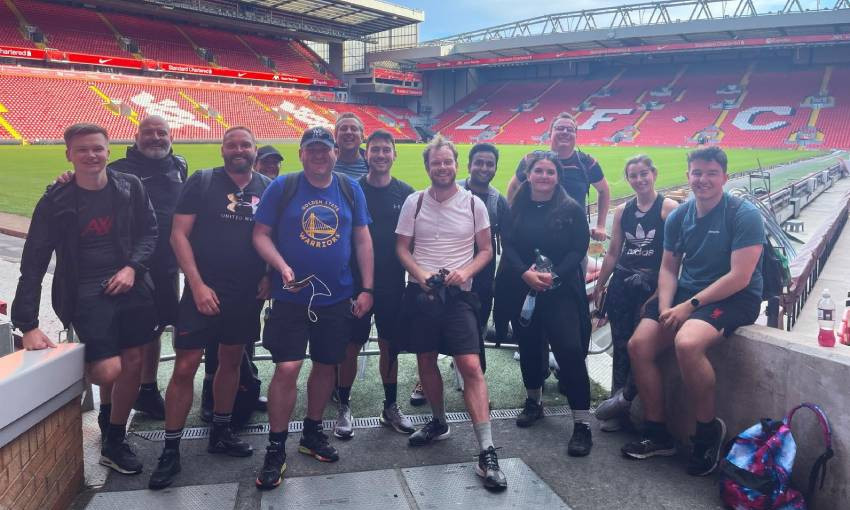 The Anfield Wrap completed a 24-mile walk on Saturday to raise vital funds to help those suffering from extreme hunger in Mumbai.

Members of the popular Liverpool-supporter podcast – along with club representatives Jane Phillipson and Sophie Coan – started at Southport FC and passed Bootle FC, Marine AFC and Goodison Park before finishing at Anfield.

They teamed up with the Official LFC Supporters Club in Mumbai to fundraise for the Community Kitchen Project, which combats hunger in the Indian city as a result of the COVID-19 crisis through long-term solutions.

The walkers were joined virtually by several OLSCs who were walking a mile in their own countries to spread awareness.

TEN GRAND! THE 24 miles are done. Thanks so much to everyone who has donated, this money will go so far - we apprec… https://t.co/af2UaPw1nT

Speaking after the nine-hour trek, The Anfield Wrap's John Gibbons told Liverpoolfc.com: "It's been an incredible day, it's been really good but it's been really hard as well, especially towards the end.

"We've done it, we're made up we've all done it together and we're delighted that we've raised so much money for an amazing cause, for an amazing supporters club who do so much all the time, but especially during COVID. They've really stepped up in terms of what they want to do for their community.

"I think generally the Mumbai Supporters Club embodies everything that's brilliant about our supporter base really. We were delighted to help them out, we were made up to go the extra mile, literally, to do a bit more for them because we think they're wonderful.

"The way they support the team and the togetherness that they show all the time is great and inspirational.

"Whenever we've gone around the world, we've done a lot of raffles for foodbanks here and people are always very generous. So we wanted to give a bit back and we were made up to do that as well."